CROSSNET Volleyball Game is the brand new four square meets volleyball game that has taken the USA by storm and is now available in the UK. Easy to set up, in your garden or at the beach, CROSSNET Outdoor is the perfect game for kids and adults to play.

CROSSNET comes with everything you need to start playing wherever you want with an adjustable height poles & net, a volleyball, hand pump and a backpack bag.

What is CROSSNET Volleyball?

CROSSNET is the world’s first hybrid game that brings together the sports of volleyball and Four Square. With just a volleyball net, poles, and a ball any Four Square game can be transformed into a fast-paced game of CROSSNET – ideal for honing your skills at the volleyball net.

What is Four Square?

A regular game of Four Square takes place on a square court divided into four sections, or quadrants. Typically played on a hard surface, the object of Four Square is to bounce the ball into one of your three opponents’ quadrants in order to eliminate them.

To avoid elimination, a receiving player must bounce the ball into another quadrant before the ball has bounced twice in their area. The ball mustn’t touch any dividing line between quadrants. The squares are numbered 1 to 4, with 4 being the highest rank and 2 being the lowest and as players are eliminated, they vacate their square and remaining players move “up” to the next highest ranked square. The eliminated player is then replaced with a new player in square one and goes to the back of the queue of waiting players.

Once you are in Square 4, you are the highest ranked player and the server for each new point. You earn one serve point each time you serve and are not eliminated. New players automatically earn on entry point each team they re-enter the game. At the end of the game, your total serve points are divided by your entry points for your final score, with the highest being the winner.

How is CROSSNET Volleyball different from Four Square?

CROSSNET keeps the same scoring mechanism and has a few specific rules, which you can see in more detail by clicking on the “How to Play & Rules” tab. Essentially though, instead of the ball bouncing as with regular Four Square, you hit the ball over the special CROSSNET volleyball net, just as you would in volleyball. As you can see from the shape of the CROSSNET net, it separates each square from the others in a cross, hence the name!

How To Play CROSSNET

CROSSNET is the world’s first version of four square volleyball. Players compete in a four-way battle to eliminate one another and have the ball land in their opponent’s square. CROSSNET games are played to 11 points and you must win by 2.

To begin playing CROSSNET, players first designate the four quadrants and assign players a number 1-4. Rallies begin by the 4th square serving diagonally to the 2nd square and then the ball being returned to any other square.

Only on hit is allowed per return. Points are only accumulated in the 4th square and players keep their points when eliminated. 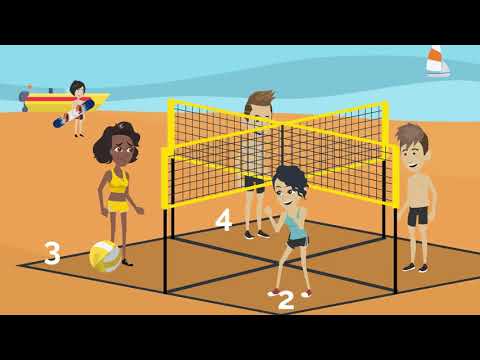 Players may hit the ball only once with their hands to return the ball over the net. We define “hands” as any area between a player’s wrists and fingertips, including the back of the hands. Players may not catch, carry or hold the ball at any time during play.

If your group decides, players can extend play by adding additional touches to each return such as bump, set, spike or our personal favorite: head, knees, and feet.

Each time a player is eliminated, that player leaves the court and all players advance to the highest number square. The lowest ranking square is then filled with a new player. All eliminated players leave the court and wait for their next turn to join in the 1 square.

These situations represent possible ways to be eliminated:

Squares are ranked highest to lowest, 4-1. There are two sets of lines on the court. Outside boundaries are the outermost edges of the entire court, while inside boundaries divide the individual squares.

If a player lands the ball on any outside boundary, it is considered in play, and the player in that square is eliminated.

Inside boundaries do not dictate if a ball is in or out. If a ball travels over the net and into a player’s square, they are responsible for returning and playing the ball.

If there is a dispute that cannot be settled by the players, then the only proper way to resolve the disagreement is through the Showdown.

The Showdown is a mini game of two-square with no custom rules and the loser is eliminated.

You Play. We Support.